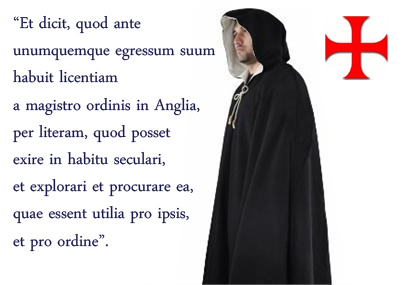 The deponent also said that he was present at the Papal Court and spoke to the Lord Pope’s priest, responsible for absolutions, who heard that both there and elswhere in the Kingdom of France many <Templars> confesssed to the aforementioned charges. The deponent said that each time he departed, he had a written permission from the preceptor of the Order in England, allowing him to wear secular dress for the purpose of investigating and attending to matters that were useful to them and to the Order <in general>. He also said that on both sides of the sea, as well as at the Papal Court, he always wore his mantle under secular clothes, and he is still wearing now.

According to Helen Nicholson (The Knights Templar on Trial: The Trial of the Templars in the British Isles, 1308-11, 181), no other Templars endorsed Totty’s story about spying at the Papal Court. In a way, this is irrelevant, because this testimony demonstrates two things. Firstly, a Knight Templar could dress in civilian clothes, as long as he had permission from his superiors and there was a need for some clandestine action or information gathering. Secondly, Knights Templar were very proud of their uniform and wore it even if it was not safe to do so.

Also, if anyone has doubts about brother Thomas’ skills, sources indicate that after the first interrogation he actually escaped! He was apparently still alive as late as 1338 (Nicholson, 214).