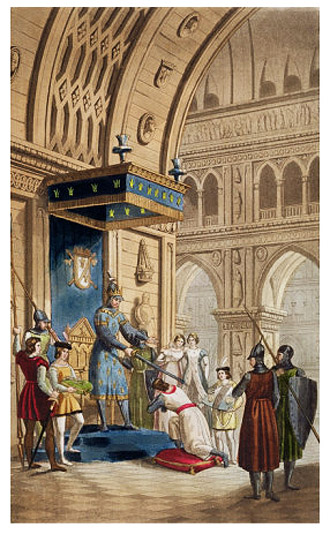 This list of 10 most well known knights in the history of the medieval Knights Templar includes heroes, saints, traitors and even one pirate. The order is largely chronological. If you want to read fascinating stories related to these (an many other) individuals, you definitely should check out Legends of the Knights Templar.

Godfroi de St Omer – considered one of the two principal founders of the Knights Templar, along with Hugues de Payens. Most likely descendant of the St Omer family in Picardy.

Gerard de Ridefort – the tenth Grand Master of the Knights Templar (1185 – 1189). Most likely of Flemish roots, Gerard de Ridefort was known for his impetuous temper. Although he clearly possessed personal bravery, his rash decisions led to one of the worst defeats of the Christian forces in Outremer in the battle of Hattin. De Ridefort himself was captured, but unlike the other Templars he was held for ransom and later released. He died during the siege of Acre in 1189.

Guillaume de Beaujeau – the 20th Grand Master of the Knights Templar (1273-1291). Guillaume bravely fought and died during the siege of Acre in 1291. Legend has it, de Beaujeau threw his sword down and proceeded to walk away from the front lines. When questioned as to why he was fleeing, the Grand Master replied, “I am not fleeing. I am dead.” De Beaujeau’s death sealed the fate of the city. Acre was lost to the Crusaders forever.

Roger de Flor (1266-1306) – probably the most famous Templar who was a sergeant-brother, not a knight. Roger de Flor (also known by his original German name of Rutger von Blume) was a captain in the Templar fleet. After he got banished from the Order on charges of extorting money from passengers during the siege of Acre in 1291, Roger sought employment around the Mediterranean, eventually becoming a pirate. De Flor’s assassination  was ordered by the Byzantine Emperor Michael IX Palaeologus.

Geoffroi de Charney (1252-18 March 1314) – At the height of his career de Charney held an important position of the Preceptor of Normandy. He was burned at the stake in Paris alongside Jacques de Molay, as both proclaimed the Order’s innocence. It is presumed that de Charney family remained in possession of the most cherished Templar relic which was later revealed to the public by a French knight named Geoffroi de Charny in the 1350s. Today this relic is known as the Shroud of Turin.

Jacques de Molay (c. 1244 – 18 March 1314) – the 22nd and last Grand Master of the Knights Templar. De Molay tried to revitalize the Order after the loss of Outremer. He rejected existing plans to merge the Templars and the Hospitallers into a single  organization. During the trials, de Molay initially agreed to the charges against the Knights Templar, but later recanted his confessions. Jacques de Molay was burned at the stake in Paris in 1314.

Pierre de Bologna (1270-1310?) – unlike most Templars, de Bologna was well educated. It is possible that he received legal training in Bologna, Italy. An ordained priest, he participated in the most notable legal attempt to clear the Knights Templar of any charges. De Bologna argued that torture could not have produced credible evidence. These defense efforts were met with fierce retribution: the knights who went back on their testimonies were burnt at the stake as relapsed heretics.

Esquin de Floyran (d. 1316) – believed to be the first person to voice his accusations against the Knights Templar, leading to their persecution by King Philip the Fair of France. There is evidence that de Floyran, a renegade Templar, held a grudge against the Order, having been punished by the Grand Master.

Hugues de Pairaud (b. 1244) – Jacques de Molay’s deputy and Visitor of the Temple in France and Poitou. Unlike de Molay and de Charney, Hugues never recanted his testimonies and most likely remained incarcerated for the rest of his life. Hugues de Pairaud was still alive in 1321, when he was interrogated regarding the whereabouts of the Templar treasures.

You may also enjoy reading this:
History of the Knights Templar at a glance