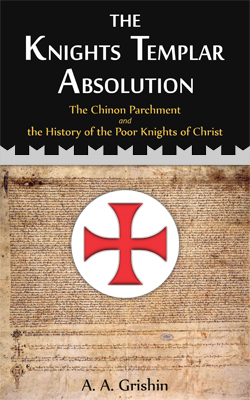 The Knights Templar Absolution at BarnesAndNoble.com

In the early 14th century, after a long series of defeats in the Levant, the Order was charged with heresy by King Philip IV of France. The Chinon Parchment (1308) details a crucial step in subsequent papal investigations into the Knights Templar activities and contains curious and disturbing depositions of the Order’s high-ranking officers, including its Grand Master, Jacques de Molay. The document has been considered lost for centuries and only rediscovered in 2001, gaining much publicity.

Chief Templars were interrogated by specially appointed cardinals at the Castle of Chinon, in a setting where they were seemingly free to speak the truth without any intimidation or fear of torture. What was the outcome of these proceedings? Were the Knights Templar guilty of the charges raised against them? Did this most famous military order of the Middle Ages go through a process of degradation, eventually turning to blasphemy, misconduct and apostasy? Were the Knights Templar condemned by the Pope or were they pardoned? This book seeks to provide plausible answers to these questions.

My interest in the Chinon Parchment started around the time when it was first made public in a somewhat obscure Italian book by Barbara Frale. Many in the  KT community were highly curious about it, so I found the book and made a very rough translation from the original Latin. I must admit that I was quite surprised to read depositions of the leading Knights Templar: they were eagerly admitting spitting on the cross during the initiation ceremony, denying Christ and kissing receptors inappropriately. It was strange, unsettling and difficult to accept.

Because my translation of the document received much notoriety and was even published in a book by someone else, I decided to publish an updated version with a commentary. I secured Barbara Frale’s permission to reproduce the Latin text and began to write. The text grew into a crush course in the Knights Templar history with some important chapters discussing the problem of the Knights Templar “guilt”. I could not stay away from this disturbing subject, but the outcome of getting deeper into the records of the trials was very much unclear to me at first. Eventually, I began to understand what was really going on. The Templars were still technically in the King’s custody. So, the intimidation factor was very much present. Also, the cardinals who investigated the chief Templars were disinterested in learning the truth about the matter. The purpose of their dealings with de Molay and his comrades was very simple. The Templars had to repeat their previous testimonies and they were supposed to be pardoned on the spot. The cardinals showed no interest whatsoever in the actual testimonies. They probably understood that confessions extracted under torture should not  have been admitted to begin with! A blanket absolution was granted (as I show in the book, Geoffroi de Gonneville was essentially pardoned without confessing any actual sins!), and the Pope displayed his authority in spiritual matters, but he was too weak to fight with the King. Otherwise, the case could have been dismantled right there at Chinon. All these findings are supported in the book by evidence from primary sources.

It is my opinion that the Chinon Parchment must not be seen as proof of the Templars’ guilt. Equally, it does not demonstrate that the Pope and his cardinals were extraordinary concerned with the Order’s well being. Instead, the Chinon Parchment rather points to the Knights’ innocence and their abandonment by the Pope and his faction within the Church.

You can get The Knights Templar Absolution at any local Amazon store as an ebook. A printed version of the book is forthcoming.

Barber, Malcolm. 1994. The New Knighthood: A History of the Order of the Temple. Cambridge: Cambridge University Press.

Eliade, Mircea. 1961. The Sacred and the Profane: The Nature of Religion. New York: Harper & Brothers.

Upton-Ward, J.M. 1992. The rule of the Templars: the French text of the Rule of the Order of the Knights Templar. Woodbridge, Suffolk, UK.