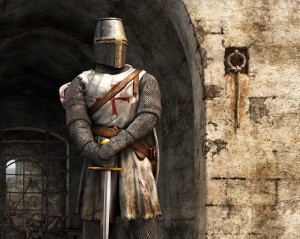 This somewhat polished story, probably based on local legends, was adapted from Revue des traditions populaires, v. XII, 1897. It can be found, along with many other fascinating tales, in Legends of the Knights Templar.

A Knight Templar from the Montbran preceptory was once traveling through Tregon. Along the way he met a poor knight riding an emaciated horse and accompanied by a badly clad servant. The Templar approached the knight and politely inquired about the best route towards Saint-Jacut-de-la-Mer. Instead of getting a response, he was simultaneously attacked by four robbers, who killed his servant and kept beating the Templar until he showed no signs of life. The travelers’ money was handed to the “poor” knight and the whole gang set out to continue their journey. But one of the robbers felt remorse and decided to stay back in order to bury the dead. He dug a grave and put the knight’s servant in it. When the robber lifted the Templar he realized that the man was still breathing. He quickly fetched some water and was able to completely revive the knight. The Templar was very thankful, but suggested that the robber should catch up with his friends. The outlaw refused to leave the knight in such a condition, offering to lead the Templar’s horse by the bridle. Once this robber, whose name was Jean, helped the knight get in the saddle he took the bridle and suddenly felt that his own feet were lifted from the ground. Thus he was able to follow the galloping stallion all the way to Matignon, without even getting tired. While passing that town, they were surprised to find out that Jean’s fellow thieves had been captured and were now awaiting execution. “My son,” said the Templar,”by pausing to perform an honorable duty you escaped the fate of these unlucky men. Surely God and the Holy Virgin are protecting you.”

When they finally came to the preceptory Jean was amazed by the splendid illumination at the Knights Templar chapel. The door opened by itself when the knight approached it and the robber followed him inside. The Templar fell down on the ground and prayed a long time. Finally he arose and spoke to Jean, “I am the Grand Master of the Knights Templar. You saved my life without knowing who I was, and I was sent by God to turn you from the path that you have been following which would have brought you the same miserable end as that of your friends. But you still have many sins to confess and repent. Do you want to return to the world, where you will perhaps once again become lost, or would you rather stay here forever?” “I will stay here forever,” answered the robber.

And ever since Jean has been living in the underground passage which leads from the chapel to the old keep of Montbran. Some people have seen him on dark nights when he leaves his refuge and tries to walk unnoticed among regular people. His beard is so long that he has to place it upon his shoulder, and it is so thick and heavy that he appears to be carrying a sack of grain. At other times, the chapel is illuminated by strange lights. These are the ghost’s of Jean’s friends who come begging him to take pity on them and to intercede on their behalf.