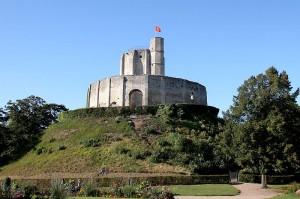 The castle in the town of Gisors was originally built to protect Normandy from the territorial claims of the French crown. It ceased being a frontier fortress after the surrounding area fell into the hands of the King of France at the end of the 12th century. For a castle that has never been formally held by the Knights Templar, Château de Gisors has many ties to the medieval Order.

In 1158, a group of three Templar Knights was appointed to maintain castles Gisors and Neafle as a part of the dowry for Marguerite, the infant daughter of King Louis VII of France. Her eventual marriage to Henry, the infant son of King II of England, was supposed to forge ties between the two kingdoms. The names of the three Templars were: Robert de Pirou, Tostes de Saint Omer and Richard of Hastings. When in 1161 King Henry II decided to bring the wedding date forward and take over the castle, along with surrounding areas, the Templar guardians happily surrendered Gisors. King Louis was furious over this act and immediately exiled the knights. This so-called Gisors affair is well attested by Roger of Hoveden:

This event may not have been the scandal of the decade, but it caused enough interest to produce a related legend, according to which the King of France apprehended the three Knights Templar and had them hanged on a tree. This dark and curious addition to the story was probably invented much later to “foreshadow” the future rift between the Order and the Kings of France. This connection is especially important because early in the 14th century the castle in Gisors served as prison for many Knights Templar, including reputedly the last Grand Master of the Order, Jacques de Molay.

Although official Knights Templar presence at Gisors amounts to only a few years, the castle is viewed as a possible location of the much rumored Templar treasure. In the 20th century a man by the name of Roger Lhomoy claimed to have excavated areas underneath the castle’s keep. Supposedly Lhomoy discovered a hidden vault with many religious statues, sarcophagi and metal coffers. Needless to say, no one else has ever been able to verify Lhomoy’s findings.

Chevalier of Montbran
The Legend of Guillaume Auger de Guigonis