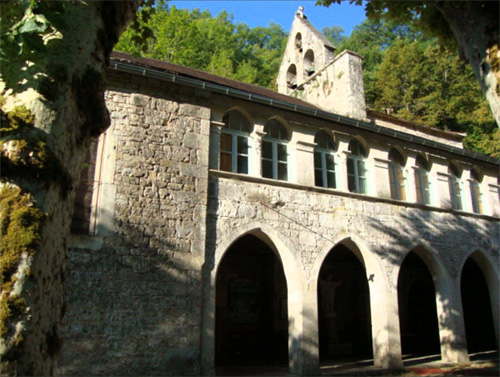 In 1227, a Templar preceptory was established on a piece of land donated by the count of Toulouse and local barons in what is known as Lacapelle-Livron. There is a local legend that purports to explain the origin of this name.

The rural area near the town of Caylus was at one point devastated by a ruthless dragon. The wretched creature continuously destroyed the peasants’ crops and even devoured their children. One day the dragon came across a young girl of immense beauty and instead of gobbling her up decided to forever keep her in his lair. Fortunately, a Knight Templar by the name of  Lagardelle was passing through the region on his way back from the Holy Land. Moved by the peasants’ pleadings he set off to kill the dragon. In order to improve the knight’s chances against the fire-breathing monster, the locals vowed to build a chapel in honor of Virgin Mary (provided that Lagardelle was successful). The Templar was indeed able to slay the dragon, freeing the poor girl.

Little is know about the fate of Lagardelle and the beauty rescued by him. Of course, as long as the knight remained true to his vows he could not marry her, for obvious reasons… The people of Caylus kept their promise and proceeded to build a chapel — right above the entrance to the dragon’s cave. However, their efforts were mysteriously thwarted and all of their building materials kept disappearing only to show up at the bottom of the hill the next morning. It was soon determined that this was done by angels, who were thus conveying instructions from Virgin Mary herself regarding the location of the new chapel. As a result, the site of the building was moved to where a 14th century church stands now. To commemorate this miraculous story of the dragon slayed by a Templar knight for the sake of a young girl’s deliverance, the chapel was dedicated as Notre-Dame-de-Livron (“la délivrance”). Eventually the entire area received a name pointing to its main attraction, the Chapel of Our Lady of Deliverance (Lacapelle-Livron).

The last Templar of Château de Maulmont (Puy-de-Dôme)
Secrets of the Knights Templar by S.J. Hodge (a review)