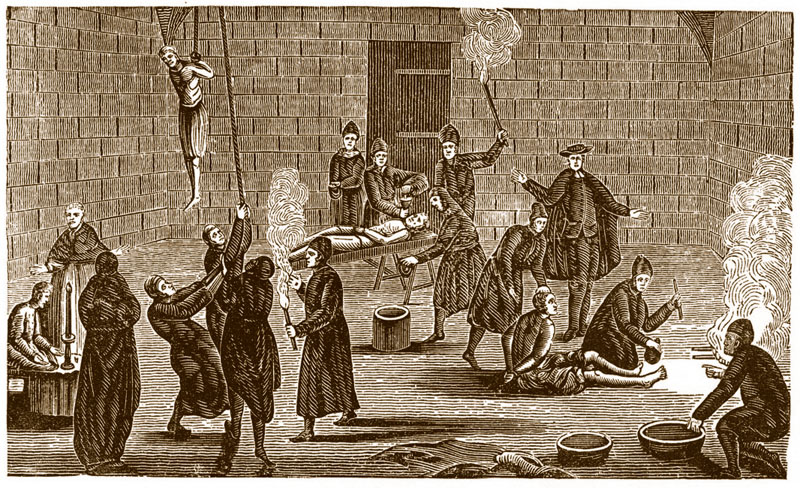 During the months immediately following the arrests of the Knights Templar by the agents of King Philip the Fair of France, the Holy See made continuous attempts to assert the Pope’s jurisdiction over the military order and assume an active role in the ongoing investigations. Clement V, of course, was much less concerned about the Templars than he was about demanding proper respect for his own authority. He also justly feared that the Order’s lands and financial resources were going to be appropriated by the crown. After prolonged dealings with the King and his investigators the Pope was finally able to have a large group of Templars delivered to Poitiers where he held his court. It has been suggested that these men were carefully chosen to present the Knights Templar in the least favorable light. They were mostly low ranking members of the Order and some of them likely held a grudge against the institution. The leaders of the Knights Templar who were also on their way to Poitiers were diverted to Chinon in an apparent attempt to invalidate papal inquiries.

A specially appointed commission heard the testimony of the 72 Templars that were brought to Poitiers from June 28 to July 1, 1308. Their confessions were along the lines of the usual admissions of spitting on the cross and denying Christ during the initiation ceremony. In the eyes of Clement V these were serious and unpleasant things, but they did not constitute heresy. At best, this looked like a strange form of apostasy, because these practices did not have any effect on the Order’s daily activities. It is possible that all such confessions resulted from torture (some of the interrogated members of the Order actually indicated that torture was applied to them). Military hazing as a rite of passage or proving one’s loyalty to the Order may also be cited as likely explanations for such strange customs if they indeed existed. On July 2, a public consistory was held during which, according to B. Frale, the Pope gave his “plenary absolution to the Templars who had confessed and gravely asked forgiveness of the Church” (Frale, Barbara (2004). “The Chinon chart—Papal absolution to the last Templar, Master Jacques de Molay”. Journal of Medieval History 30 (2): 125. ).

In August of the same year the Pope sent his deputies to Chinon where the leaders of the Knights Templar, including their Grand Master, were similarly interrogated. Their confessions along with their absolution pronouncements have been recorded in the Chinon Parchment.

It may seem that this was the perfect time to stop the trial of the Knights Templar in its tracks. This, of course, did not happen. Clement V demonstrated that he could freely exercise his authority in spiritual matters. However, he was unable (or unwilling) to wrestle the legal case against the Templars out of the hands of King Philip’s lawyers. Unfortunately, many Templars who were settled their spiritual affairs with the Catholic Church in the summer of 1308 eventually found death in the hands of the French king.

See also: History of the Knights Templar at a glance