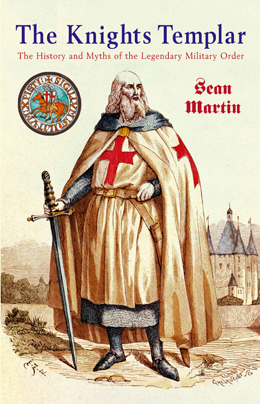 To avoid any confusion, be advised that this review deals exclusively with the audio version of Sean Martin’s “The Knights Templar: The History and Myths of the Legendary Military Order,” as narrated by James Jordan. The book itself is a solid piece of scholarship on par with many other works published on the topic. However, this is quite possibly the only non-fiction “Templar” title available to those of us who rely on audio recordings to stay abreast with the book market.

The narrator’s voice is suitably professorial, but it did not take too long to spot some problems. For instance, how would you pronounce Urban II? “Urban the First,” right? James Jordan’s preferred way of reading the name of the pope who inspired the Crusades is “Urban Two.” Several similar instances can be found throughout the recording. Numerous other mishaps show up in other proper names: “Jacques” rhymes with “shucks,” the “ch” in “Theoderich” is pronounced as “ch” in “rich,” and the first sillable in “Outremer” is is the same as in the word “out” – with one exception. The phrase “Franks in Outremer” sounds like “Frank Sinatra mare.”  It is obvious that the narrator unfortunately does not have any knowledge of neither French nor German, and there was no supervising editor capable of correcting him. In fact, on more than one occasion there seems to be no editorial input whatsoever, when the narrator begins a sentence, aborts it and then reads it again! Shouldn’t such errors be fixed in post-production?

I got the book for free when I signed up for Audible.com, but I cannot honestly recommend it to anyone as a “good listen.” Just too much of a discrepancy between the solid scholarly content and James Jordan’s uneducated narration.

For a paperback version, check out:
“The Knights Templar: The History and Myths of the Legendary Military Order.”