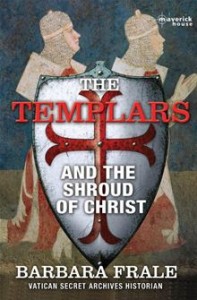 A concise and informative introduction to the Knights Templar / Shroud of Turin connection. Barbara Frale summarizes a great deal of modern research, in particular Ian Wilson’s The Turin Shroud: The Burial Cloth of Jesus Christ?

After the sack of Constantinople in 1204 a great number of relics which had been previously stored in the imperial capital were either lost or transferred to the West. One of the focal points of Byzantine Christianity, the so called Mandylion, could no longer be accounted for. This relic was believed to have been a towel bearing the image of Christ – not a painted portrait, but instead the Savior’s image that became miraculously imprinted when Jesus held the towel up to his face. Barbara Frale maintains that the Mandylion was actually a folded piece of cloth with a full body image, now known as the Shroud of Turin. At some point during the 13th century this object came into the possession of the Knights Templar, who used it in their religious ceremonies. Fully understanding the value of the shroud, the Order was reluctant to disclose it to the Pope and the church in general. The secrecy that surrounded this object partially explains some of the strange confessions made by the Knights Templar during their trials, including accounts of Baphomet, the mysterious idol that was presumably worshiped by the Order.

There is no particular piece of evidence that makes this theory irrefutable, but the combined weight of supporting facts makes the whole matter plausible. Here is my favorite: Geoffroi de Charney was burned at the stake alongside with Jacques de Molay in 1314. In 1350, Geoffroi de Charny presented the shroud of Christ to the church he had just founded in his home town. The discrepancy in the  last names is something that any scholar of medieval manuscripts will easily disregard. It seams likely that the Charney family kept the relic in safety for almost half a century after the demise of the Knights Templar order.

“The Tempars and the Shroud of Christ” was a very enjoyable read. I have to admit that it gave me a new appreciation for the Knights Templar and their importance in the history of Christianity. Definitely recommend it.

The Second Crusade is at hand! Louis VII taking the banner at St Denis.
History of the Knights Templar at a glance