In 1997 two French researchers, Marion and Courage, claimed to have discovered previously unseen characters on the surface of the Shroud of Turin, using certain image processing techniques. The letters did not make a whole lot of grammatical sense, and few were convinced that they really exist. In 2009, Barbara Frale published a book where she gave her own reading of these words. She also provided additional support for the theory that the Shroud was in the possession of the Knights Templar. Possibly this relic was the actual object that started the rumors about a mysterious “head” worshiped by the Templars. As far as Frale’s interpretation of the words on the Shroud, she took them to be Jesus’ “death certificate”. I have some doubts about the validity of the proposed readings, but before I even attempt to come up with my own it would be nice to independently reproduce the image processing technique. So far, the only source I have for this method is found on this page (in Italian):

In essence, the method consists of removing the “fish bone” texture of the canvas, in order to bring up the writing. Unfortunately, I don’t have any Photoshop filters to achieve the same result…

It must be added that by simply looking at the untraced results of the two most important words in the inscription, one can see that they are by no means distinct and unmistakable. 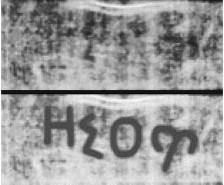 This one is being interpreted as ΝΑΖΑΡΕΝΝΙΟΣ – Nazarite:

To say the least, I am not convinced that there is much to this theory. But I would still like to try the same imaging techniques!