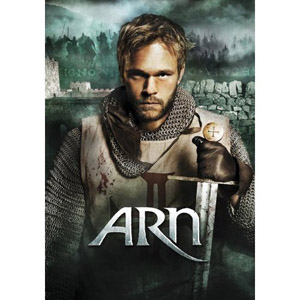 Well, I finally got to watch Arn: The Knight Templar (Swedish title “Arn – Tempelriddaren”). The movie is based on a trilogy by Jan Guilou, available in English. I am mentioning the book because the main thing you will notice if you watch the movie is that most plot lines are only initiated in the movie and will need to find their resolution later. So, you just may have to get a hold of the books, to learn what happened. (Update: this was written before the movie was released in its entirety. As it turns out, it is actually a mini-series!)

The main character’s story follows a generic hero plot line. Nothing unusual. Arn Magnusson is likable and for the most part believable. He seems to journey from naivete to experience quite quickly in a well-depicted atmosphere of a Medieval feudal society. Arn’s Templar activities are really not the main focus of the movie. However, if you would like to see some scenic views of Scandinavia, this is a movie for you! There is just a little bit of fighting and violence throughn in for good measure. On the whole, no masterpiece, but if you like the subject matter (I would stress that it is primarily Middle Ages vs. Templar history specifically) you might enjoy it. Oh, yeah, there is a nice shot of a Templar sword with the “In Hoc Signo Vinces” motto. That explains why I have seen replicas of this sword for sale!