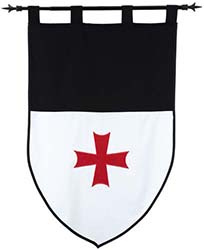 The recent events in Norway are extremely disturbing in their own right. But it should not go unnoticed that the historic order of the Knights Templar has been once again grossly misunderstood and misrepresented. The issue is very complex, of course, and the history of the Crusades will forever remain a subject of debates. It is very important to remember, however, that if someone were to pick a symbol of anti-multiculturalism, choosing the Knights Templar is simply ridiculous. In fact, you’d be better off blaming these knights for being the original multiculturalists! Here is one excellent tidbit of history to illustrate this point.

Usama ibn Munqidh, Amir of Shaizar (1095–1188) included an interesting story in his autobiographical “Book of Instruction with illustrations” which can be found in Francesco Gabrieli’s “Arab Historians of the Crusades”, p.48 of the English translation published by Routledge in 2010. Usama relates how, while being in Jerusalem, he used to go to the al-Aqsa mosque, which was controlled by the Templars who were his “friends.” They would always provide a small room for Usama’s prayers. One day, as he began to pray, a Frank grabbed him and turned him to face east, adding “That is the way to pray!” (Muslims, of course, turn in the direction of the Kaaba). Several Templars immediately interfered and Usama was able to proceed with his prayers. As soon as they stopped monitoring the Frankish intruder, he once again forcefully turned the Muslim around. At this time, the Templars took the Frank away and apologized to Usama, explaining that the man had just arrived today and was unfamiliar with the customs of Islam.

I would like to point out that Usama is telling this story in order to illustrate “Frankish barbarism,” so from a historian’s point of view this account gains credibility when it comes to assessing the degree of tolerance displayed by the Templars.

Grand Master of the Knights Templar in François Raynouard’s tragedy