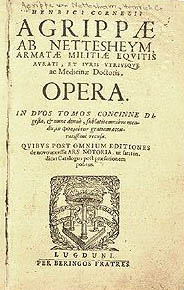 It seems to me that the role of Cornelius Agrippa in originating modern myths about the Knights Templar has been exagerated. I will not bore the reader with multiple references to the works of modern researchers who borrow from each other’s books the quote from Agrippa’s De Occulta Philosophia. Nobody even bothers to indicate the exact place in the treatise that the quote originates from. So, first things first.

“Everyone knows that evil spirits can be summoned through evil and profane practices (similar to those that Gnostic magicians used to engage in, according to Psellus), and filthy abominations would occur in their presence, as during the rites of Priapus in times past or in the worship of the idol named Panor to whom one sacrificed having bared shameful parts. Nor is any different from this (if only it is truth and not fiction) what we read about the detestable heresy of the Knights Templar, as well as similar notions that have been established about witches, whose senile womanish dementia is often caught causing them to wander astray into shameful deeds of the same variety.”

Michael Haag (“The Templars. The History & the Myth”) believes that by placing the Templars in the same context with witches Agrippa “thrust the order into the phantasmagoria of occult forces which were subject of the persecuting craze for which the Malleus Maleficarum was a handbook.” Obvious anachronism aside (the Templars have been well put away by the early 16th century), Cornelius Agrippa says absolutely nothing that his contemporaries did not know. Marino Sanudo (c. 1260 – 1338) in his Historia Hierosolymitana comfortably discusses the worship of the gilded head, the practice of dissolving the ashes of deceased knights and drinking the concoction for increased strength by their comrades, and of course smearing the idol with fat produced by roasting baby girls engendered by the Knights Templar. This account is often repeated by later writers. In Agrippa’s time, for instance, Pietro Crinito (Peter Crinitus, 1475 – 1507) relates such horrific details in his work De Honesta Disciplina (incidentally, a book used by Nostradamus). The tradition continued in such works as Hofmann’s (1635-1706): Lexicon Universale. Nicholas Guertler also mentions these allegations, but clearly does not find them to be grounded in reality.

As far as I am concerned, Cornelius Agrippa’s brief mention of the Knights Templar is of very little importance. Agrippa himself certainly did not make much of it.