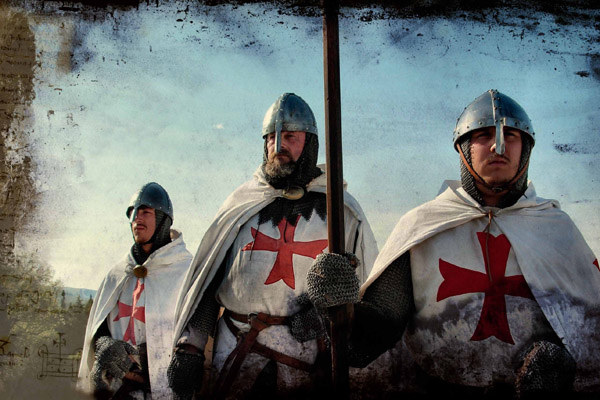 “Red monks”  (er menahet ru in Breton, moines rouges in French) is a term particularly used in Brittany (Bretagne) to designate the Knights Templar. Sometimes, however, in the context of this term no distinction is made between the Templars and the Knights Hospitaller.

The red monks are featured in many local legends in which they appear as cruel knights with dark and obscure motivations. The name may denote their blood thirst of simply be reminiscent of the Templar cross. Disappearances of young women as well as other crimes were blamed on these “red monks.” There are also local stories about recurrent apparitions, such as that of a man clad in red that can be seen riding a skeleton of a horse wielding a bloodied sword. He is sometimes believed to be a certain Templar Grand Master of extraordinary cruelty.

A rather well-known Breton ballad  about three red monks has been translated by Sir Francis Hastings Doyle and published in his The return of the guards: and other poems (1866). It is reprinted here along with Doyle’s noteworthy comment where he suggests that the existence of such legends can be attributed to a deliberate campaign that was designed to besmear the Knights Templar at the time of their persecution. One also wonders why Brittany with its non-French population gave rise to so many unfavorable legends about the Knights Templar.

THE THREE RED MONKS; or, THE TEMPLARS,

This Ballad, besides its poetical merit, which appeared to me, when I read it, of the very highest order, is historically curious, as showing the malignant industry which was at work to pave the way for, or justify, the ruin of the Templars.

Through every limb a shuddering sense of pain and terror runs,
As I recall the ills that fall on earth’s unhappy sons;
As on my troubled soul returns that deed of shame and fear,
Which, nigh to Quimper’s ancient town, was wrought within the year.

Along the path young Katelik tripped, telling of her beads,
When three monks joined her, armèd men, high on their armèd steeds; —
Three monks on mighty steeds, all steel from head to foot, who sped
Straight down the middle of the road, wrapped in their mantles red.

“Come with us to the convent now; come with us, maiden fair;
“Nor silver, by my troth, nor gold, shall ever fail you there.”
“With your good leave, my noble lords, not I; I do not dare
“To do this thing, so much I fear the heavy swords you wear.”

“Come with us, without any fear; come home, as we desire.”
“I will not; I would rather far pass straight into the fire.”
“Come to the convent; you will soon be happy there, no doubt”
“I will not to the convent come; I choose to stay without.

“Seven of our country girls, they say, entered that convent door;
“All fair young girls, for troth-plight ripe, who never left it more.”
“If seven, ere this, have entered in, the eighth art thou,” they say;
Upon their steeds they throw themselves, and gallop wild away.

Home flee they hurrying, with the girl athwart their horses thrown;
Her lips fast fettered by a gag, lest men should hear her moan.
When seven long months had passed, or eight — perchance, ’twas even more,
Upon that evil brotherhood there fell a trouble sore.

They said, as the time passed beyond those seven long months, or eight, .
“How deal with this girl, brothers, now, and what must be her fate? ”
“Deep under earth, or better far, below the cross — or  stay ! —
” ‘Neath the high altar — best of all — we’ll bury her away.”

” ‘Tis well ! we’ll bury her to-night, ‘neath that high altar’s base;
” Her kinsmen ne’er will look to find the corpse in such a place.”
Day sunk; it seemed as if the sky were bursting right asunder;
Showers dashed, hail beat, the wild winds raved, out-roared them all the thunder.

A poor knight then, from head to foot, drenched by the driving rain.
Was travelling on, belated, o’er the tempest-beaten plain.
He wandered round to find some house for shelter and repose.
When right before him, as he went, the Templars’ church arose.

Through the keyhole he looked, when lo! before his wondering sight,
Deep in that gloomy church there gleamed a little thread of light
‘Neath the high altar, on the left, three monks plied hard the spade;
With both small feet bound fast, a girl upon her side was laid.

No answer came; the light went out. At that barred door, the knight
Stood like a statue, stricken dumb by wonder and affright.
Till he heard the woman wail, from out the black depths of her tomb,
“I ask but rites baptismal for this creature of my womb;

“And for myself God’s holy oil, to bring the peace of death.
“If these were here, how gladly then would I give up my breath.”
*My Lord the Bishop, rise at once! Bishop of Cornwall, rise!
“Upon a couch of softest down your drowsy body lies;

“Upon a couch of softest down throughout the night you sleep,
“Whilst a poor girl is moaning near, in dark earth buried deep;
“Claiming but rites baptismal for the creature of her womb,
“And for herself God’s holy oil, down in that living tomb.”

‘Neath the high altar, ordered by our count, we plied the spade;
Just as the Bishop hurried in, we lifted out the maid
Out of that gloomy trench we drew the poor young thing away;
A little child, in slumber calm, across her bosom lay.

Both arms were bitten in despair, her breast was torn apart
Yes, she had torn her milk-white breast, down to the very heart
The good Lord Bishop, when he saw that sight, no measure kept;
Into the grave, on both his knees, he flung himself, and wept.

Three days, three nights, on that cold ground, he knelt and strove in prayer;
Barefooted all the time, and clad but in a shirt of hair.
The third night passed, whilst all the monks were ranged in order round;
Between its two lights stirred the child, then rose from off the ground.

It opened wide its wondrous eyes, and to the three monks red
Walked all at once — walked onward straight. “These are the men,” it said.
A child not three days old by God to walk and speak was raised;
The dark deed thus by miracle made known, His name be praised.

Then they were burnt alive, their ashes tossed to the random airs;
So, in the body, suffered they for that foul crime of theirs.