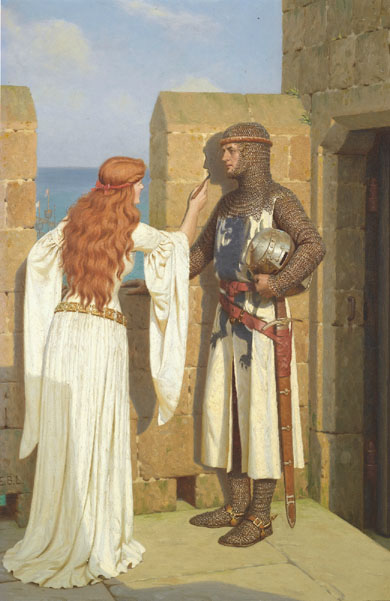 Edmund Blair Leighton is known for his  iconic works  depicting medieval life in its most romanticized form: “The Accolade”, “God Speed”, “Tristan and Isolde” and many others. “The Shadow” is probably the most symbolic and enigmatic. A noble maiden is tracing the silhouette of her beloved knight on the castle wall. There is a ship clearly visible in the harbor, indicating the knight’s imminent departure, probably for the Holy Land. And be sure to notice the other shadow in the lower left quadrant of the canvass. The second shadow certainly adds depth to the painting, but it definitely creates an ominous presence. I also wonder if some people who got a chance to admire the painting (it exists in several authentic versions, I believe) had a strange feeling that their own shadow is being cast into the romantic past.
Naturally, this is not a Templar Knight, but he will probably go into battle alongside with the Poor Soldiers of Christ.