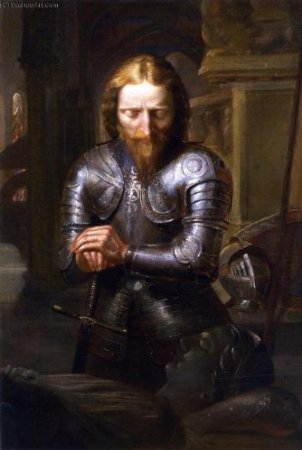 James Edward Freeman (1808–November 21, 1884) was an American painter, diplomat, and author. He studied painting in New York and later in Italy, where he served as a U.S. Consul to Ancona, part of the Papal States, and spent a greater part of his life.

This 1842 painting represents a touching scene of a Crusader knight returning home to discover that while he was away his wife (or, possibly, mother) has passed away. Notice the radiant light on the face of the knight, despite of him being in a scarcely lit corner of the church. There is no specific Templar connection here, but I would like to use this as an illustration of the fact that a married knight could indeed join the Order of the Knights Templar, as long as his wife conceded to such a change of status. Standard rules of abstinence would still be in effect, of course, and in most cases the spouses would have lived in different parts of the known world.

See also: 10 things you’d have to give up to become a Knight Templar