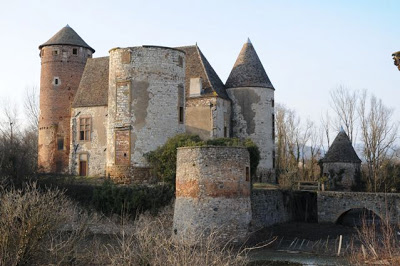 D’Arginy Castle (Rhône department in eastern France) was once the property of Guillaume de Beaujeu, the 21st Grand Master of the Knights Templar who fought heroically during the siege of Acre in 1291. According to some accounts, Guillaume at one point dropped his sword and began to walk away. He was questioned by his astonished subordinates who thought that their commander attempted to flee the battlefield. “Je ne m’enfuis pas, je suis mort,” (I am not fleeing, I am dead) de Beaujeu replied, showing a mortal wound to his soldiers.

The castle of Arginy has always attracted much interest because of its Templar and eventually occult connections. It is certainly  among the top locations where the treasures of the great military order could have been hidden after 1307.  An early subterranean search of the castle was initiated by Anne of France (Anne de Beaujeu, 1461 – 1522), the eldest daughter of King Louis XI. This royal treasure hunt ended in a bizarre and tragical way when a group of  diggers heard a bone chilling scream rising from an excavated underground gallery. Complete silence followed, but they waited in terror for quite some time, until one of their comrades came out of the dark pit. He appeared horribly disfigured, with brain oozing out of the crushed scull, and his movements seemed strange and unnatural. After taking a few steps in the open air the man collapsed. His friends rushed over to him only to discover that the body was already cold. He must have been dead for some time! One wonders if this local story contains a reference to the legendary death account of Guillaume de Beaujeu. Was the Grand Master indeed already dead when he addressed his comrades? Great stuff for a Gothic novel!

See also:
Legends of the Bézu Castle in Languedoc