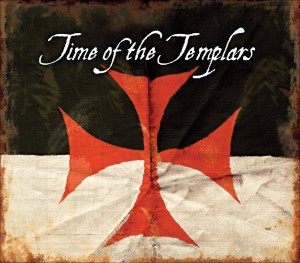 This carefully assembled collection of medieval music has three distinct parts. The first part showcases ecclesiastical music from the 12th and 13th centuries. Incidentally, this would have been exactly the type of music that the Knights Templar would have heard on a daily basis during worship (which took up much of their time). The second part of the collection features secular music of the same period. Members of the great military order would have been prohibited from singing, dancing or listening to music of this sort, but these lively tunes were impossible to ignore. Many knights certainly heard them performed on occasion and probably secretly cherished musical memories of their lives before they joined the Order. Finally, the selection was made complete by adding some musical pieces of Middle Eastern origin. For the Knights Templar stationed in the Holy Land, these exotic melodies were surely part of the background.

And let’s not forget the album cover. It looks great in my iPod’s carousel!

The Knights Templar greatly revered Our Lady, the Blessed Virgin Mary, who was considered the Order’s patroness. Bernard the Clairvaux, the spiritual godfather of the Knights Templar, was a one of the most devout Marianists in the history of the Catholic Church. It is no coincidence that the Knights’ Templar prayers during their imprisonment  contained the words “May Mary, Star of the Sea, lead us to the harbor of salvation.”

Salve Regina is an 11th century hymn, most likely composed by Hermann of Reichenau. Although this hymn was never exclusively “Templar,” there are reasons to believe that it was favored by the Knights. First stanza of the hymn:

Translation:
Hail, holy Queen, Mother of Mercy,
our life, our sweetness and our hope.
To thee do we cry, poor banished children of Eve;
to thee do we send up our sighs,
mourning and weeping in this valley of tears.

P.S. There is a three-disc album entitled Music from the Time of the Templars.

A French group called Ensemble Organum has a CD entitled “Le Chant des Templiers.” Online reviews mention a twelfth century manuscript that was used as a sources of these liturgical chants. I felt the need to further research this claim. The website of the group (organum-cirma.fr) explains that this manuscript was purchased by Duke d’Aumale at the end of the 19th century, and it is presently housed a the Chantilly castle. Good enough for me, even though I would very much like to see some scans.

I have a strong suspicion that many readers of this blog enjoy Renaissance-inspired rock by Blackmore’s Night. Good news! They are about to release a new album on September 3, 2010. It will contain 15 songs + bonus track. Songs include: All The Fun of the Faire; Journeyman; Vagabond (Make A Princess of Me); and Strawberry Girl
plus many others… Can’t imagine it being anything but a treat!