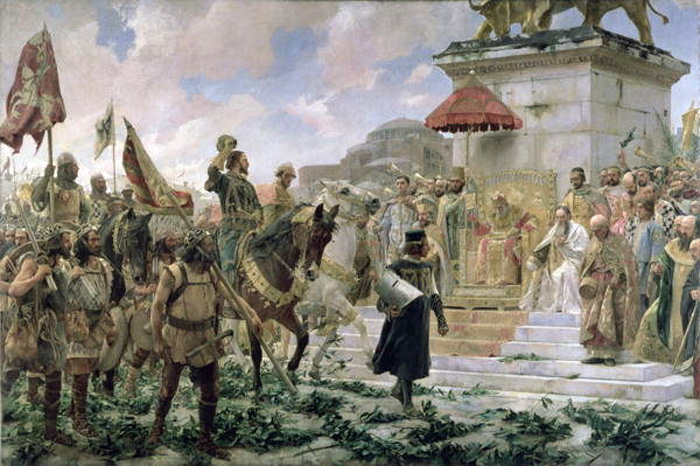 The subject of this painting by Jose Moreno Carbonero (1860-1942) is rather unlikely. It depicts the arrival of Roger de Flor to Constantinople in 1303. He is accompanied with 8000 ‘Almogavares’ serving the Byzantine Emperor in Battle against the Turks. Who was Roger de Flor?

The following story can be found, along with many other fascinating tales, in “Legends of the Knights Templar”.

The life and career of Roger de Flor (1267-1305, also known as Rutger von Blume) is so incredible that it seems legendary. Much of what is known about this man comes from a book written by one of his subordinates. It appears that Roger to a German knight in the service of Frederick II and was drawn to sea faring at a young age. He became a cabin boy on a Templar ship and eventually joined the Order as a sergeant. During the siege of Acre in 1291, Roger de Flor commanded a Knights Templar ship called the Falcon. There were reports that he used that calamitous situation to enrich himself, charging civilians for their rescue from the embattled city. As a result, de Flor was expelled from the Order of the Knights Templar. He went on to command a fleet of ships for Charles of Naples, who was involved in a war with Aragon over Sicily. When Charles was no longer able to pay his mercenaries, Roger de Flor offered to his crews rich spoils in the Levant. His career continued as a mixture of privateering and outright piracy. The success of de Flor’s navy was such that his employer, the Byzantine Emperor Andronicus II, was forced to see him as an equal. De Flor married a Byzantine princess and received a duke’s title. The life of plunder, warfare and intrigues could hardly end any other way but with an assassination, which was carried out at the behest of the new Emperor, Michael IX Palaeologus.