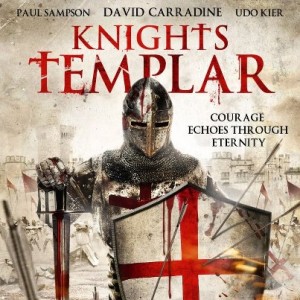 What’s the absolute best thing about watching a movie that is known to be a veritable train-wreck? That it delivers!

Should I issue a spoiler alert? Perhaps, but the movie’s trailer is even more revealing.

“Night of the Templar,” directed by Paul Sampson, was meant to capitalize on the never ceasing popularity of the Knights Templar while using a rather typical horror movie plot structure. Actual historic references are weak and obscure. The back story of the film involves a group of Templars who are trying to figure out what’s next for them after their Order had fallen out of favor. The choices made by these soldiers unexpectedly come into play when a motley crew of visitors arrives at a somewhat luxurious contemporary manor for a “fantasy weekend.” Their adventure quickly turns into a blood bath when someone wearing full Templar armor unleashes his wrath on the guests. Curiously enough, Agatha Christie could have made this plot work perfectly, but an opportunity for a decent whodunit is wasted in favor of an unimaginative metempsychosis explanation of what takes place on the grounds of the estate. Early on in the movie, it becomes evident that the man charged with organizing the “fantasy weekend” is none other than the reincarnated Templar commander featured in the back story. As a result, the plot suffers a terrible blow, because there is simply not a twist in existence that could  make us believe that this character is not responsible for the bloodshed. The viewer is simply forced to wait for the rest of the puzzle pieces to fall into place. The only surprise at the end comes in form of a completely misused principle of comic relief. In fact, if you end up liking the movie even in the slightest degree, the last ten minutes will take care of that.

One truly unexpected thing is that the movie could possibly contain some clues about the death of David Carradine (I will omit the details not meant for PG audiences). Does that make it worth watching? Probably not.