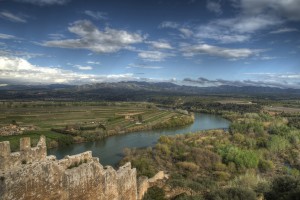 The Templar castle of Miravet (Castillo de Miravet) was among the strongest in Aragon. The original Moorish fortress at this location was captured by Ramon Berenger IV in 1153 and given to the Knights Templar. The Order enlarged and fortified the castle. In early 1308, at the height of the Knights Templar trials, King James II of Aragon besieged Miravet. A Templar garrison of no more than 70 knights defended the castle for almost a year under the command of Ramon sa Guardia, the last Preceptor of Mas Deu. The besieged brothers firmly insisted that the Order was innocent and holy. Ramon sa Guardia used every opportunity to remind the King of Aragon that the Templars shed their blood for his realm in the past and that they led exemplary lives. In a letter addressed to James II, Ramon stated his pity towards him, the King of France and all Catholics, because they would  experience great harm stemming from these events, even more so than the Templars themselves who had to endure the evil attacks. The Preceptor believed that persecutors of the Order were doing the Devil’s work.

The starving garrison finally surrendered in late 1308. Ramon sa Guardia was sent to Rousillon where he eventually faced a tribunal, once again denying all accusations against the Knights Templar. After the subsequent dissolution of the Order, Ramon was allowed to reside at the former preceptory of Mas Deu, where he died around 1320.

According to a local legend, every year on December 28 (the date of the Miravet’s final surrender to James II of Aragon) the ghost of the fortress’ commander appears on its delapidated walls. Dressed in Templar uniform, he encourages his brothers to reconquer the Holy Land.