When speaking about Templar symbols one must distinguish between the symbols used by the Knights Templar order, as a means of identifying itself and its property, and the symbols used by the Templars for various other reasons. This other category includes numerous symbols, some of which were very common in the Middle Ages, so there is nothing unusual in the fact that the Knights used them. In modern Templar myths you can find all sorts of symbols attributed to the Templars. I will only discuss symbols (some of them, of course) for which there is archaeological or manuscript evidence.

The following symbols were used by the Knights Templar as a means of asserting their identity. Sometimes they were combined in a single image (e.g. the cross on a banner) 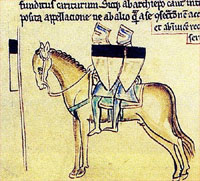 This black and white flag, perhaps signifying the strife between good and evil, was probably the most important symbol for each individual Knight Templar. According to the statutes of the Order, knights were supposed to always be aware of the flag’s location on the battle field. Whenever the knights would become scattered and disoriented they were supposed to gather in a formation under Beauseant. If the Templar banner was not visible, the knights headed towards the Hospitaller flag or, lacking one, to any other Christian standard on the battle field.

Two knights on one horse

This famous image of two Templars riding one horse signifies the vow of poverty. The symbol is found on many Knights Templar seals.

The red cross symbolized martyrdom. It could be seen on the Knights’ Templar garb. This symbol is distinctly different from the White Cross of Hospitallers (who eventually adopted the red cross) and the black cross of the Teutonic Order. 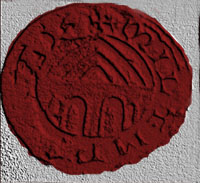 There are various theories regarding the identity of the dome seen on many templar seals. It may be the Dome on the Rock, the Church of the Holy Sepulchre, or simply a representation of the original Temple of Solomon.