Ordinum equestrium et militarium catalogus in imaginibus expositus by Filippo Bonanni (1638-1725). Peter Partner compared this book  to a modern day coffee book. It is indeed loaded with illustrations and devoted to a very popular subject: Chivalric orders. During the 18th century, everything that had to do with nobility, heredity and power was of extreme interest to a lot of people who were on the outside looking in — the European bourgeoisie. Filippo Bonanni managed to find the most obscure orders and organizations throughout history (that might be a subject in itself), but his Knight Templar looks rather strange. The armor is almost Roman! The accompanying text is fair and rather sympathetic to the Knights. There is one obvious mistake about the date when the Order received its Rule. 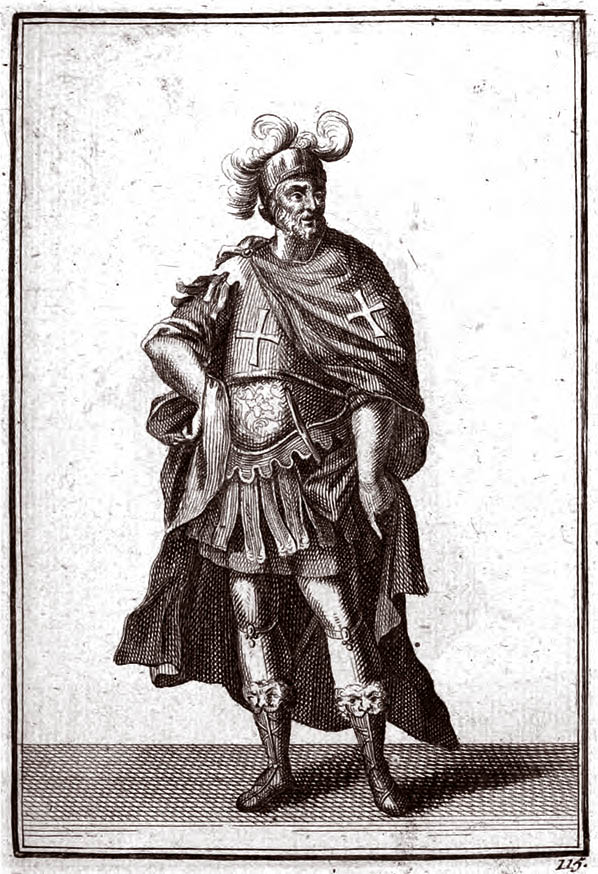 The Order of the Templars, following the Hospitallers’ example, was instituted by Frankish leaders after the holy crusade (bellum sacrum), waged under the auspices of Pope Urban II and Godfrey of Bouillon, for the sake of preserving that which had been happily recovered. Its originators were Hugues de Payens and Geoffroy de St. Omer, both knights of outstanding rank. Because they were dwelling in a place adjacent to the Temple of the Lord, at the permission of King Baldwin, they received the name of Templar Brothers. They lived in a manner of regular canons and guided pilgrims to holy sites, avoiding the snares of thieves and barbarians, until by the mandate of Pope Honorius and Stephanus, Patriarch of Jerusalem, in the year 1118 they were given a Rule, said to be composed by Bernard <de Clairvaux>, as well as white woolen vestments, and finally, by the authority of Pope Eugene, they received the red cross as a distinction; so that wearing white clothing as a sign of purity, they would not refuse to accept martyrdom for the name of Christ on the account of the red crosses, and would be prepared to spill their blood for the defense of the Holy Land. <Jacques> de Vitry in his “History of the East”, chap. 65 relates that they carried a two-colored banner of black and white, because they were radiant and kind with the friends of Christ, but dark and horrifying towards his enemies. The had a square eight-cornered  cross, similar to the Maltese cross. However, Hieronymus Romanus argues that theirs was a double cross, similar to the Patriarchal cross, which we show under number 106. In the end, after enduring much hardship, this Order was destroyed by decree of the Council of Vienne, and its possessions were awarded to the Hospitallers, at the time residing in Rhodes. You can find a discussion about their dissolution in <Juan de> Mariana, <Bartolomeo> Platina, Giovanni Villani, Johannes Azorius and others. We publish an engraving of such a Knight in full garment.

P.S. I would just like to add that it’s always fun trying to figure out obscure bibliographical references in books of this period!