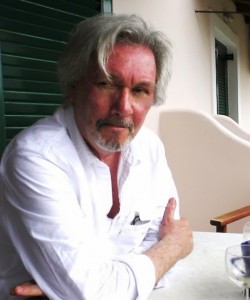 “I live in London which I love for its beauty, variety and cosmopolitanism. I count myself fortunate to have read anthropology at university; it is a study that gives you an insight into how societies work and combines very well with my historical imagination. Travelling is important; I do a fair amount of it. Travel is like reading books; I do both for the same reasons – discovery and learning.”

Michael Haag has written travel guides to Greece, Egypt, Lebanon and Syria, published by Cadogan Books and The American University in Cairo Press.  He has also written Alexandria: City of Memory, about Constantine Cavafy, E M Forster and Lawrence Durrell in Alexandria, which was published by Yale University Press, and “The Templars: The History and the Myth: From Solomon’s Temple to the Freemasons” published in Britain by Profile Books and in America by Harper Collins. Michael recently returned to the inexhaustible topic of the Crusades with ” The Tragedy of the Templars: The Rise and Fall of the Crusader States.” In this special interview for the Knights Templar Vault, Michael Haag shares his perspective on the history of the Middle East and the Crusades.

Q. Michael, thank you for kindly agreeing to be interviewed for the Knights Templar Vault. It is pretty obvious that you have a strong interest in the history of the Middle East and the Crusades. How did this interest develop and at what point did you decide that among dozens of books about the Knights Templar there is room for at least a couple more and you should write them?

A. I love the Mediterranean; the warmth and the fragrance.  I am especially attracted to the Eastern Mediterranean, warmer and more pungent; also it is very old, and I am fascinated by the multiple overlays of history – often expressed in the architecture of temples, churches, synagogues and mosques, sometimes built upon one another or growing out of one another.  Syria, Lebanon, Israel, Egypt, all have their Mediterranean aspects and have shared in its history; all have their connections with other Mediterranean countries, Spain, France, Italy, Greece, Turkey and across North Africa.  All have been part of the Roman Empire, and before that all the Eastern Mediterranean was part of the Hellenistic world.  So for me the Middle East is part of something much larger in time and space.

My specific interest in the crusades was inspired by the young T E Lawrence when he was not yet ‘of Arabia’.  In 1909, during the summer of his twenty-first birthday, he walked 1100 miles through Palestine and Syria, visiting scores of crusader castles.  After reading of his journey and his descriptions of the castles, I decided to follow in his footsteps, or rather I cheated and I drove through much of Syria in a car.

You cannot visit castles like Krak, Safita, Margat and Saone without being amazed at the scale of the endeavour, the magnificence of their design and the beauty of the landscapes they survey.  I knew the ancient sites of Greece and Egypt well; Syria, I discovered, not only has ancient sites but also wonderful castles, and to visit them is to awaken stories of battles and sieges and lonely mountain vigils.  That is how my interest in the crusades began. END_OF_DOCUMENT_TOKEN_TO_BE_REPLACED 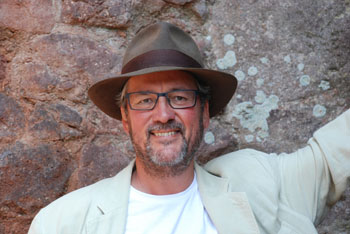 Michael Jecks is a British novelist well known for his series of murder mysteries set in early 14th century England. One of the series’ two lead characters, Baldwin de Furnshill, is a former Knight Templar who returned home following the Order’s disbandment. Michael Jecks’ most recent novel, Templar’s Acre, is a prequel to his main series, covering young Baldwin’s adventures in the Holy Land around the time of the siege of Acre. The writer is very active on FaceBook and Twitter. In this interview for the Knights Templar Vault, Michael Jecks speaks about medieval history, the Knights Templar, conspiracy theories and modern fiction.

Q. Choosing a former Knight Templar as a protagonist should sound like a solid idea to any dispassionate connoisseur of popular fiction, given the time period featured in your mystery series: such a character is sure to have gravitas, experience and inner brokenness. Iron Man would have been a Templar if he lived in the early 1300s! Literary theory aside, what were the factors that helped you pick the hero for your début novel and then stick with him for so long?

A. The idea was never to work with one lead character originally. I had read extensively about the period, and I was convinced by Professor Norman Cohn’s proposition that the Templars were an example of persecution, victims of a horrendous abuse of power. I did not find the proposition that the Templars could be guilty even remotely convincing (the fact that the accusations laid against them had been used by the same monarch only a year before in order to steal the assets of the Jews was pretty convincing to me!). I was delighted to use a Templar in order to put the record straight about them, but also I was thinking about a series of books, and the idea of a conflicted, religious, anti-papal knight who returned to his ancestral lands was thoroughly appealing. He would make a superb investigator, I thought. Analytical, politically aware, and with some forensic skills based on his experience in war. END_OF_DOCUMENT_TOKEN_TO_BE_REPLACED